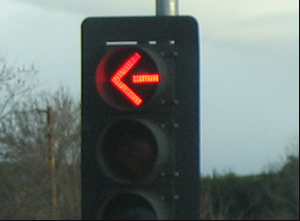 Ticket Ninja will help you to beat these tickets!

Citations issued for violation of 21453 c vc is one of the most common traffic tickets in California.   Red Light tickets for violation of Section 21453 c vc of the California Vehicle Code can be successfully contested and dismissed.  These California traffic tickets may be issued by an officer or by the red light photo enforcement program.   The citations issued through the Automated Enforcement Systems operated by private companies in conjunction with the various cities are becoming more common as the various municipalities see these tickets as a potential revenue stream.

The true cost of VC 21453 c fine amount may be much higher than the fine amount for the red light ticket in the long term as the DMV point can lead to higher auto insurance rates for three years of more.

At Ticket Ninja CA, we are the experts when it comes to helping you to get your red light citation dismissed.  We use a proven method of Trial by Written Declaration that gives you two chances to get your  traffic ticket dismissed.  Our fee is a very reasonable $99, and it comes with a 100% money back guarantee if your red light ticket is not dismissed!  Click here to get started today!